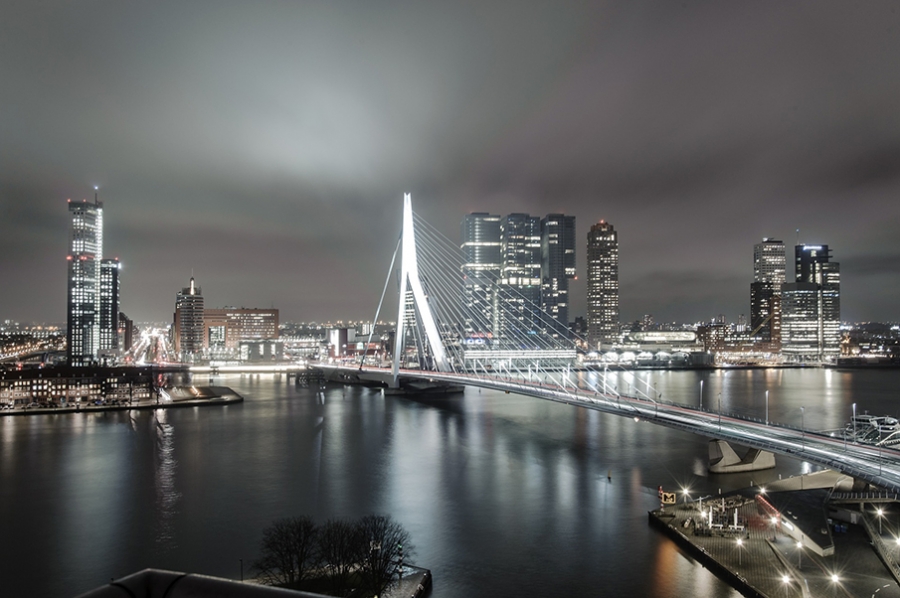 In this blog post I’d like to tell you about a Dutch city that’s very close to my heart. Because even though I’ve lived in Amsterdam for the last half year, my true hometown will always remain Holland’s second biggest city: Rotterdam.

Rotterdam is located in the province of South Holland, and has at the moment a bit more than 600.000 residents. It also houses the biggest port of Europe.

Unlike many other big cities in the Netherlands, Rotterdam does not have the typical Dutch architecture that you might know of photos. Instead, it looks much more metropolitan, and resembles New York City in looks more than Amsterdam.

The reason for this is that Rotterdam was completely bombed during the Second World War, and thus everything had to be rebuilt. This has also made the architecture in Rotterdam much more adventurous.

While in Amsterdam the emphasis is very much on preserving the old architecture and image of the city, Rotterdam does not hesitate to take down old buildings and create new ones. As such it is known for its skyscrapers and broad streets, and houses the largest building in the Netherlands, the Maastoren (165 meters high). You might have also seen an image of the well-known cube houses or ‘kubuswoningen’, which is one of Rotterdam’s distinct architecture projects. For a long time Rotterdam used to be known to many Dutch people as ‘grey’ and ‘ugly’. However, over the last couple of years Rotterdam has seen a true revival. Many new buildings have been created that set Rotterdam even more apart as a metropolitan city with new and experimental architecture.

The renovation of the Centraal Station railway station in 2014 played a big role in this. Other distinct design projects that followed are the Markthal, and the Rotterdam, a building designed by the renowned Dutch architect Rem Koolhaas. Apart from new buildings Rotterdam is also reviving in other ways. Every month new hip lunch places and coffee rooms seem to crop up, and new festivals and other cultural activities are being organised as well. And even though the nightclub Perron has just closed its doors, a new one will soon open around the corner, giving another boost to the dancing scene in Rotterdam.

Due to all these changes Rotterdam is now also being noticed abroad, and it was selected as one of the best cities in the world to visit in 2014 by the annual Rough Guide Travel Hotlist.

So if you are planning on visiting the Netherlands, please do not forget to pay Rotterdam a visit! You won’t regret it.